Prussian blue
Prussian blue (also known as Berlin blue or, in painting, Parisian or Paris blue) is a dark blue pigment produced by oxidation of ferrous ferrocyanide
Pigment
A pigment is a colored material that is completely or nearly insoluble in water. In contrast, dyes are typically soluble, at least at some stage in their
Phthalocyanine Blue BN
Phthalocyanine Blue BN, also called copper phthalocyanine (CuPc) and many other names, is a bright, crystalline, synthetic blue pigment from the group
Blue
Blue is one of the three primary colours of pigments in painting, drawing (art) and traditional colour theory, as well as in the RGB colour model. It lies
Cerulean
Other nineteenth century English pigment names included "ceruleum blue" and "corruleum blue". When the cerulean blue pigment (see the adjacent colour box)
Cobalt blue
Cobalt blue is a blue pigment made by sintering cobalt(II) oxide with aluminum(III) oxide (alumina) at 1200 °C. Chemically, cobalt blue pigment is cobalt(II)
Egyptian blue
quantities of blue color to meet demand, the Egyptians needed to manufacture the pigment themselves. The earliest evidence for the use of Egyptian blue, identified
YInMn Blue
YInMn Blue (for yttrium, indium, manganese), also known as Oregon Blue or Mas Blue, is an inorganic blue pigment that was discovered accidentally by Professor
Maya blue
Maya blue (Spanish: azul maya) is a unique bright azure blue pigment manufactured by cultures of pre-Columbian Mesoamerica, such as the Maya and Aztec
Indigo
turns blue. The blue pigment settles as sediment at the bottom of the tub. The sediment is scooped out and stored. When dyeing cloth, the pigment is then 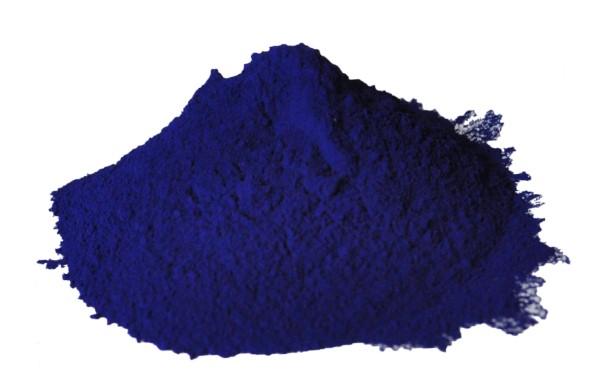