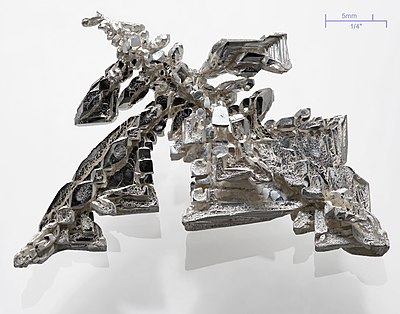 Silver
Silver is a chemical element with the symbol Ag (from the Latin argentum, derived from the Proto-Indo-European h₂erǵ: "shiny" or "white") and atomic number
Silver jubilee
Silver jubilee marks a 25th anniversary, also known as a quadranscentennial anniversary. The anniversary celebrations can be of a wedding anniversary,
Silvering
Silvering is the chemical process of coating a non-conductive substrate such as glass with a reflective substance, to produce a mirror. While the metal
Silver Star
The Silver Star Medal (SSM) is the United States Armed Forces' third-highest military decoration for valor in combat. The Silver Star Medal is awarded
Silver dollar
Canadian silver dollar Silver dollar or dollar may also refer to: Silver certificate (United States) Silver dollar, a North American–style pancake. Silver dollar
Silver Surfer
The Silver Surfer is a fictional character appearing in American comic books published by Marvel Comics. The character also appears in a number of movies
Silver Tongue
up silver tongue in Wiktionary, the free dictionary. A "silver tongue" implies one with a tendency to be eloquent and persuasive in speaking. Silver tongue
Silver (Silver album)
Silver is the debut studio album by American country rock band Silver, it was released in May 1976 through Arista Records. Rob Caldwell of AllMusic wrote
Deep Silver
Deep Silver is an Austrian video game publisher and a division of Plaion. Eugenio Vitale serves as the director of games development for Deep Silver. Deep
The Beatles
Holly and the Crickets. They used this name until May, when they became the Silver Beetles, before undertaking a brief tour of Scotland as the backing group