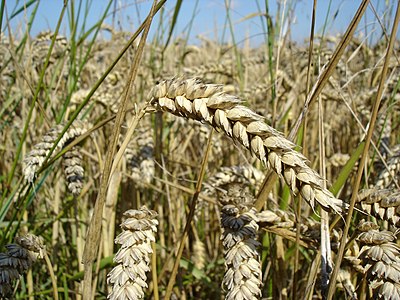 Wheat
Wheat is a grass widely cultivated for its seed, a cereal grain that is a worldwide staple food. The many species of wheat together make up the genus Triticum;
Wheat berry
A wheat berry, or wheatberry, is a whole wheat kernel, composed of the bran, germ, and endosperm, without the husk. Botanically, it is a type of fruit
Durum
Durum wheat (/ˈdjʊərəm/), also called pasta wheat or macaroni wheat (Triticum durum or Triticum turgidum subsp. durum), is a tetraploid species of wheat. It
Common wheat
Common wheat (Triticum aestivum), also known as bread wheat, is a cultivated wheat species. About 95% of wheat produced worldwide is common wheat; it is
Wheat beer
Wheat beer is a top-fermented beer which is brewed with a large proportion of wheat relative to the amount of malted barley. The two main varieties are
Winter wheat
Winter wheat (usually Triticum aestivum) are strains of wheat that are planted in the autumn to germinate and develop into young plants that remain in
Gluten
certain cereal grains. Although, strictly speaking, "gluten" only refers to wheat proteins, in medical literature it refers to the combination of prolamin
Wheat flour
Wheat flour is a powder made from the grinding of wheat used for human consumption. Wheat varieties are called "soft" or "weak" if gluten content is low
Semolina
Semolina is the coarse, purified wheat middlings (intermediate milling stage) of durum wheat mainly used in making couscous, pasta, and sweet puddings
Bulgur
different wheat species, most often from durum wheat. It originates in West Asian cuisine. Bulgur is sometimes confused with cracked wheat, which is crushed