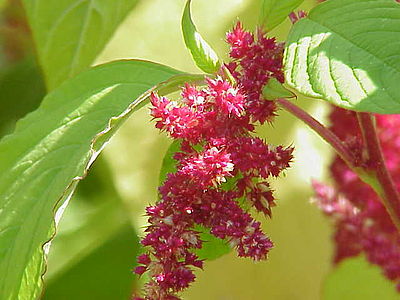 Amaranth
of annual or short-lived perennial plants collectively known as amaranths. Some amaranth species are cultivated as leaf vegetables, pseudocereals, and ornamental
Amaranth grain
genus Amaranthus have been cultivated for their grains for 8,000 years. Amaranth plants are classified as pseudocereals that are grown for their edible
Amaranth (color)
Amaranth #E52B50 #E52B50 Amaranth is a reddish-rose color that is a representation of the color of the flower of the amaranth plant. The color shown is
Amaranthus viridis
botanical family Amaranthaceae and is commonly known as slender amaranth or green amaranth. Amaranthus viridis is an annual herb with an upright, light green
Amaranthus caudatus
names such as love-lies-bleeding, pendant amaranth,[citation needed] tassel flower, velvet flower, foxtail amaranth, and quilete.[citation needed] Many parts
Amaranth Advisors
Amaranth Advisors LLC was an American multi-strategy hedge fund founded by Nicholas M. Maounis and headquartered in Greenwich, Connecticut. At its peak
Amaranth (dye)
Amaranth, FD&C Red No. 2, E123, C.I. Food Red 9, Acid Red 27, Azorubin S, or C.I. 16185 is a modified red azo dye used as a food dye and to color cosmetics
Amaranthus palmeri
plant in the amaranth genus. It has several common names, including carelessweed, dioecious amaranth, Palmer's amaranth, Palmer amaranth, and Palmer's
Amaranth (song)
"Amaranth" is the thirteenth single by Finnish symphonic metal band Nightwish. It was released as the first official single from their sixth studio album
Gomphrena globosa
Gomphrena globosa, commonly known as globe amaranth, is an edible plant from the family Amaranthaceae. The round-shaped flower inflorescences are a visually