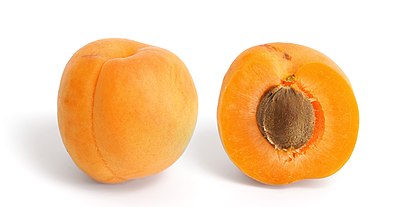 Apricot
Usually, an apricot is from the species P. armeniaca, but the fruits of the other species in Prunus sect. Armeniaca are also called apricots. Apricot first
Apricot (color)
Apricot is a light yellowish-orangish color that is similar to the color of apricots. However, it is paler than actual apricots. The etymology of the
Apricot kernel
An apricot kernel is the apricot seed located within the fruit endocarp, which forms a hard shell around the seed called the pyrena (stone or pit). The
Apricot brandy
Apricot brandy can refer to a liquor (or Eau de Vie) distilled from fermented apricot juice or a liqueur made from apricot flesh and kernels. Various brands
Dried apricot
Dried apricots are a type of traditional dried fruit. When treated with sulfur dioxide (SO₂), the color is vivid orange. Organic fruit not treated with
Apricot Princess
Apricot Princess is the second studio album by English recording artist Rex Orange County. It was released on 26 April 2017. All tracks written and produced
Apricot oil
Apricot oil or apricot kernel oil is pressed from the kernels of the Prunus armeniaca (apricot). Apricot kernels have an oil content of 40-50%. The oil
Apricot (disambiguation)
Briançon apricot, Prunus brigantina Desert apricot, Prunus fremontii Pittosporum angustifolium, Australian native tree Apricot (color) APRICOT (conference)
Apricot Computers
Apricot Computers was a British electronic company that produced desktop personal computers in the mid-1980s. Apricot Computers was a British manufacturer
Prunus mume
Prunus. Its common names include Chinese plum, Japanese plum, and Japanese apricot. The flower, long a beloved subject in the traditional painting and poetry