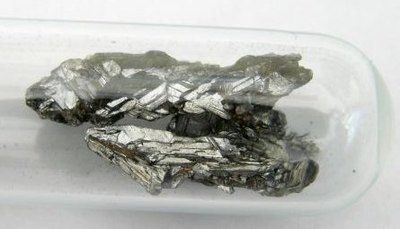 Arsenic
Arsenic is a chemical element with the symbol As and atomic number 33. Arsenic occurs in many minerals, usually in combination with sulfur and metals,
Arsenic poisoning
Arsenic poisoning is a medical condition that occurs due to elevated levels of arsenic in the body. If arsenic poisoning occurs over a brief period of
Arsenic trioxide
Arsenic trioxide, sold under the brand name Trisenox among others, is an inorganic compound and medication. As an industrial chemical, its major uses
Arsenic (disambiguation)
arsenic in Wiktionary, the free dictionary. Arsenic is the chemical element with symbol As and atomic number 33. Arsenic may also refer to: Arsenic trioxide
Arsenic trisulfide
Arsenic trisulfide is the inorganic compound with the formula As2S3. It is a dark yellow solid that is insoluble in water. It also occurs as the mineral
Arsenic oxide
Arsenic oxide may refer to any of the following: Arsenic dioxide, As2O4 Arsenic trioxide, As2O3 Arsenic pentoxide, As2O5 This set index page lists chemical
Arsenical
Arsenicals are chemical compounds that contain arsenic. In a military context, the term arsenical refer to toxic arsenic compounds that are used as chemical
Arsenical bronze
Arsenical bronze is an alloy in which arsenic, as opposed to or in addition to tin or other constituent metals, is combined with copper to make bronze
Isotopes of arsenic
Arsenic (33As) has 33 known isotopes and at least 10 isomers. Only one of these isotopes, 75As, is stable; as such, it is considered a monoisotopic element
Arsenic and Old Lace (film)
Arsenic and Old Lace is a 1944 American black comedy film directed by Frank Capra and starring Cary Grant. The screenplay by Julius J. Epstein and Philip