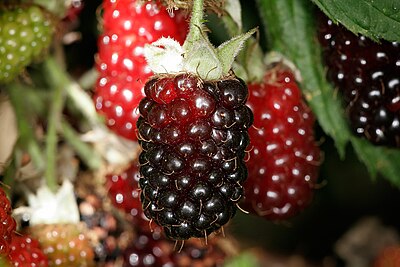 Boysenberry
The boysenberry /ˈbɔɪzənbɛri/ is a cross between the European raspberry (Rubus idaeus), European blackberry (Rubus fruticosus), American dewberry (Rubus
Marionberry
producing up to six tons in a harvest. There is a hybrid variety with boysenberry in Australia called Silvanberry. Classed under the blackberry family
Rudolph Boysen
– November 25, 1950) was a California horticulturist who created the boysenberry, a hybrid between several varieties of blackberries, raspberries, and
Walter Knott
Farm amusement park in California, introduced the Boysenberry, and made Knott's Berry Farm boysenberry preserves. On December 11, 1889, Knott was born in
Broccoli (company)
subsidiary that published manga in North America. It had a boys love imprint, Boysenberry Books, that launched in 2007. It ceased operations in December 2008 and
Rubus
including raspberries, blackberries, and hybrids such as loganberry, boysenberry, marionberry and tayberry. The stems of such plants are also referred
Knott's Bear-y Tales: Return to the Fair
original dark ride. Guests board red colored vehicles equipped with boysenberry jelly blasters, and the theme focuses on riders stopping Crafty Coyote
Knott's Berry Farm
New Year's Eve. A boysenberry festival is held at Knott's that has food and drink prepared in a variety of ways with boysenberries. There are also special
Maricopa County, Arizona
: 300  A small amount of plum is also produced here.: 301  All of the boysenberry,: 307  half of the elderberry (along with Yavapai),: 307  and a small
Charles M. Schulz
Merritt, Christopher; Lynxwiler, J. Eric (2010). Knott's Preserved: From Boysenberry to Theme Park, the History of Knott's Berry Farm. Santa Monica, CA: Angel