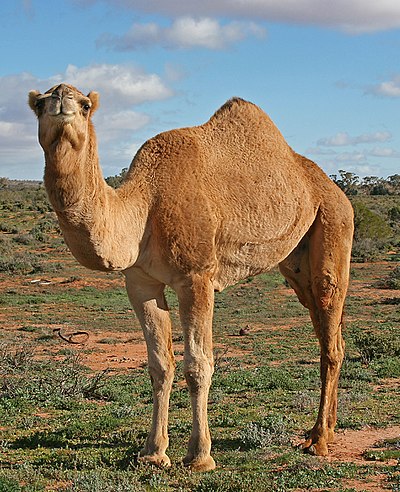 Camel
A camel (from: Latin: camelus and Greek: κάμηλος (kamēlos) from Hebrew or Phoenician: גָמָל gāmāl.) is an even-toed ungulate in the genus Camelus that
Camel case
Camel case (sometimes stylized as camelCase or CamelCase, also known as camel caps or more formally as medial capitals) is the practice of writing phrases
Bactrian camel
The Bactrian camel (Camelus bactrianus), also known as the Mongolian camel or domestic Bactrian camel, is a large even-toed ungulate native to the steppes
Camel (cigarette)
Camel is an American brand of cigarettes, currently owned and manufactured by the R. J. Reynolds Tobacco Company in the United States and by Japan Tobacco
Camel toe
Camel toe, or cameltoe, is slang for the outline of the labia majora (the outer lips of the vulva) in tightly fitting clothes. Owing to a combination
Customized Applications for Mobile networks Enhanced Logic
Customized Applications for Mobile networks Enhanced Logic (CAMEL) is a set of standards designed to work on either a GSM core network or the Universal
Dromedary
ˈdrɒm-/ or US: /-ˌdɛri/;), also known as the dromedary camel, Arabian camel, or one-humped camel, is a large even-toed ungulate, of the genus Camelus,
Camel (band)
Camel are an English progressive rock band formed in Guildford, Surrey, in 1971. Led by guitarist Andrew Latimer, they have released fourteen studio albums
Sopwith Camel
The Sopwith Camel is a British First World War single-seat biplane fighter aircraft that was introduced on the Western Front in 1917. It was developed
Wild Bactrian camel
The wild Bactrian camel (Camelus ferus) is a critically endangered species of camel living in parts of northwestern China and southwestern Mongolia. It