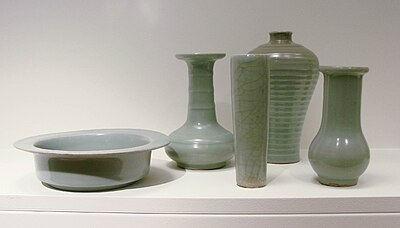 Celadon
Celadon (/ˈsɛlədɒn/) is a term for pottery denoting both wares glazed in the jade green celadon color, also known as greenware or "green ware" (the term
Celadon (disambiguation)
Celadon may refer to: Celadon, in Chinese pottery, a family of glazes, and also wares in jade-like green colours Celadon (color), a pale, sea-green pigment
Celadon Group
Celadon Group, Inc. was a truckload shipping company located in Indianapolis, Indiana. It was one of the ten largest truckload carriers in North America
Korean pottery and porcelain
which is a new form between earthenware and porcelain, white clay inlay celadon of Goryeo, and later styles like minimalism that represents Korean Joseon
Goryeo ware
the Goryeo dynasty, from 918 to 1392, but most often refers to celadon (greenware). Celadon techniques were first introduced from China; Goryeo potters established
Longquan celadon
Longquan celadon (龍泉青瓷) is a type of green-glazed Chinese ceramic, known in the West as celadon or greenware, produced from about 950 to 1550. The kilns
Shades of green
seawater as seen from the surface. Celadon /ˈsɛlədɒn/ is a pale greyish shade of green, or rather a range of such shades. Celadon originates as a term for a class
The Romance of Astrea and Celadon
The Romance of Astrea and Celadon (French: Les Amours d'Astrée et de Céladon) is a 2007 historical romantic comedy-drama film written and directed by Éric
L'Astrée
fifth-century Forez, the heroine Astrée (named after Astræa) and her lover Céladon (who gave his name to the ceramic). The perfidies and political ambitions
Koryo Celadon
Koryo Celadon is a 1979 South Korean short documentary film directed by Paul Raimondi about Goryeo dynasty pottery. It was nominated for an Academy Award