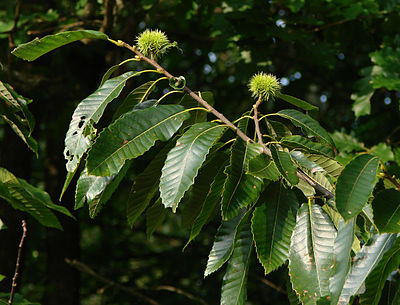 Chestnut
The chestnuts are the deciduous trees and shrubs in the genus Castanea, in the beech family Fagaceae. They are native to temperate regions of the Northern
American chestnut
The American chestnut (Castanea dentata) is a large, fast-growing deciduous tree of the beech family native to eastern North America. As is true of all
Morris Chestnut
Morris Lamont Chestnut (born January 1, 1969) is an American actor. He first came to prominence for his role as Ricky in the 1991 film Boyz n the Hood
Chestnut (color)
Chestnut or castaneous is a colour, a medium reddish shade of brown (displayed right), and is named after the nut of the chestnut tree. An alternate name
Joey Chestnut
Joseph Christian Chestnut (born November 25, 1983) is an American competitive eater. As of 2022, he is ranked first in the world by Major League Eating
Jeffrey Lurie
years into Harcourt General Inc., a $3.7-billion conglomerate based in Chestnut Hill, Massachusetts, with 23,700 employees worldwide. In its heyday it
Water chestnut
Water chestnut may refer to either of two plants (both sometimes used in Chinese cuisine): The Chinese water chestnut (Eleocharis dulcis), eaten for its
Castanea sativa
Castanea sativa, the sweet chestnut, Spanish chestnut or just chestnut, is a species of tree in the family Fagaceae, native to Southern Europe and Asia
The Chestnut Man
The Chestnut Man (Danish: Kastanjemanden) is a Danish crime series released on Netflix on 29 September 2021. The series was created by Dorte Warnøe Hagh
Chestnut blight
American chestnut (Castanea dentata) and American chinquapin (Ca. pumila) are highly susceptible to chestnut blight. The European chestnut (Ca. sativa)