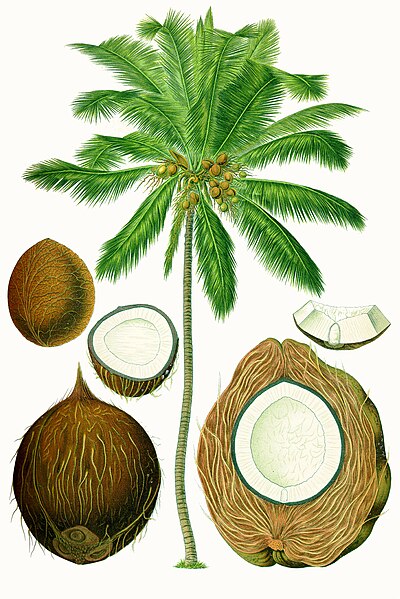 Coconut
The coconut tree (Cocos nucifera) is a member of the palm tree family (Arecaceae) and the only living species of the genus Cocos. The term "coconut" (or
Coconut milk
Coconut milk is an opaque, milky-white liquid extracted from the grated pulp of mature coconuts. The opacity and rich taste of coconut milk are due to
Coconut crab
The coconut crab (Birgus latro) is a species of terrestrial hermit crab, also known as the robber crab or palm thief. It is the largest terrestrial arthropod
Death by coconut
"Injuries Due to Falling Coconuts", exaggerated claims spread concerning the number of deaths by falling coconuts. Falling coconuts, according to urban legend
Coconut oil
Coconut oil (or coconut butter) is an edible oil derived from the wick, meat, and milk of the coconut palm fruit. Coconut oil is a white solid fat below
Jason Schwartzman
acted in. Schwartzman has released three albums through his solo project Coconut Records, having previously been drummer in the rock band Phantom Planet
Sprouted coconut
Sprouted coconuts, also referred to as coconut sprouts, are the edible spherical sponge-like cotyledons of germinating coconuts. They have a crunchy watery
Coconut Island
Coconut Island may refer to: Coconut Island (Florida) Coconut Island (Hawaii Island), in Hilo Bay Coconut Island (Oahu Island), in Kaneohe Bay Coconut
Coconut sugar
Coconut sugar (also known as coco sugar, coconut palm sugar, coco sap sugar or coconut blossom sugar) is a palm sugar produced from the sap of the flower
Coconut water
Coconut water (also coconut juice) is the clear liquid inside coconuts (fruits of the coconut palm). In early development, it serves as a suspension for