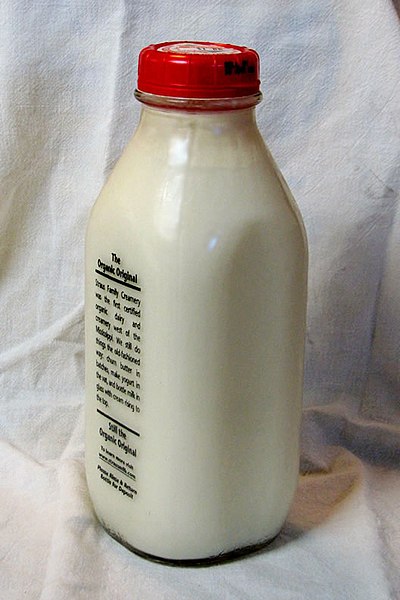 Cream
Cream is a dairy product composed of the higher-fat layer skimmed from the top of milk before homogenization. In un-homogenized milk, the fat, which is
Cream (disambiguation)
up cream in Wiktionary, the free dictionary. Cream is a dairy product. Cream may also refer to: Cream (band), 1960s British rock supergroup Cream (Japanese
Ice cream
Ice cream is a sweetened frozen food typically eaten as a snack or dessert. It may be made from milk or cream and is flavoured with a sweetener, either
Cream (band)
Cream were a British rock band formed in London in 1966. The group consisted of bassist Jack Bruce, guitarist Eric Clapton, and drummer Ginger Baker.
Sour cream
Sour cream (in North American English, Australian English and New Zealand English) or soured cream (British English) is a dairy product obtained by fermenting
Cream soda
Cream soda (also known as creme soda or creaming soda) is a sweet soft drink. Generally flavored with vanilla and based on the taste of an Ice cream float
Plant cream
imitate the viscosity and mouthfeel of cream. Common varieties are soy cream, coconut cream, and cashew cream. It is used as a dessert topping and in
The cream
"The cream" is a testosterone-based ointment that is used in conjunction with anabolic steroids such as tetrahydrogestrinone (THG, also known as "the
Clotted cream
Clotted cream (Cornish: dehen molys, sometimes called scalded, clouted, Devonshire or Cornish cream) is a thick cream made by heating full-cream cow's milk
Whipped cream
Whipped cream is heavy cream that is whipped by a whisk or mixer until it is light and fluffy and holds its shape, or by the expansion of dissolved gas