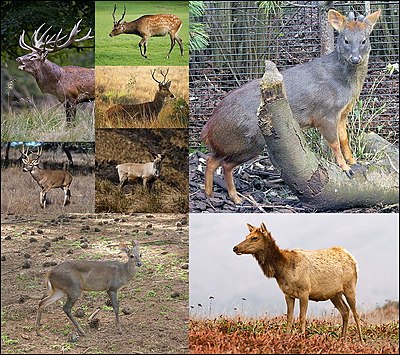 Deer
Deer or true deer are hoofed ruminant mammals forming the family Cervidae. The two main groups of deer are the Cervinae, including the muntjac, the elk
As the Deer
"'As the Deer" is a well-known praise and worship hymn song by Martin J. Nystrom, a native of Seattle. Written in 1984, this song is based on Psalm 42:1;
Red deer
red deer (Cervus elaphus) is one of the largest deer species. A male red deer is called a stag or hart, and a female is called a hind. The red deer inhabits
White-tailed deer
The white-tailed deer (Odocoileus virginianus), also known as the whitetail or Virginia deer, is a medium-sized deer native to North America, Central
The Killing of a Sacred Deer
The Killing of a Sacred Deer is a 2017 psychological thriller film directed by Yorgos Lanthimos, from a screenplay by Lanthimos and Efthymis Filippou.
The Deer Hunter
The Deer Hunter is a 1978 American epic war drama film co-written and directed by Michael Cimino about a trio of Russian-American steelworkers whose lives
Sika deer
The sika deer (Cervus nippon), also known as the spotted deer or the Japanese deer, is a species of deer native to much of East Asia and introduced to
Mule deer
The mule deer (Odocoileus hemionus) is a deer indigenous to western North America; it is named for its ears, which are large like those of the mule. Two
Roe deer
The roe deer (Capreolus capreolus), also known as the roe, western roe deer or European roe, is a species of deer. The male of the species is sometimes
Deer fly
Deer flies (also known in some parts of the mid-Atlantic United States as sheep flies) are bloodsucking insects considered pests to humans and cattle.