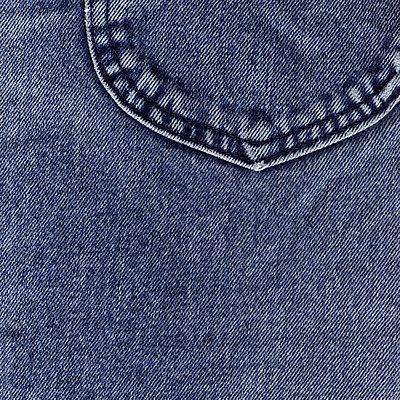 Denim
Denim is a sturdy cotton warp-faced textile in which the weft passes under two or more warp threads. This twill weaving produces a diagonal ribbing that
List of colors: A–F
#7E5E60 49% 37% 38% 356° 15% 43% 25% 49% Pantone Denim #1560BD 8% 38% 74% 213° 80% 41% 89% 74% Crayola Denim blue #2243B6 13% 26% 71% 227° 69% 42% 81% 71%
Jeans
Jeans are a type of pants or trousers made from denim or dungaree cloth. Often the term "jeans" refers to a particular style of trousers, called "blue
Laminated Denim
Laminated Denim is the 22nd studio album by Australian psychedelic rock band King Gizzard & the Lizard Wizard, released on 12 October 2022; five days
Denim & Rhinestones
Denim & Rhinestones is the ninth studio album by American country music singer Carrie Underwood. The album was released on June 10, 2022, through Capitol
Denim on Denim
Denim on Denim may refer to: Denim on Denim (song), a 2018 by Tebey Denim on Denim (album), a 2010 album by Library Voices This disambiguation page lists
Denim and Leather
Denim and Leather is the fourth studio album by English heavy metal band Saxon released in 1981. The album was certified Gold status in the U.K. This
Denim (disambiguation)
up denim in Wiktionary, the free dictionary. Denim is a kind of cloth. It may also refer to: Denim (band), Lawrence Hayward's musical group Denim Air
Denim (band)
Denim were an English indie rock band, the brainchild of Lawrence (formerly of Felt), and was based in Birmingham, England. Following the end of his former
White Denim
White Denim is an American four-piece rock band from Austin, Texas, United States. Their music is influenced by dub, psychedelic rock, blues, punk rock