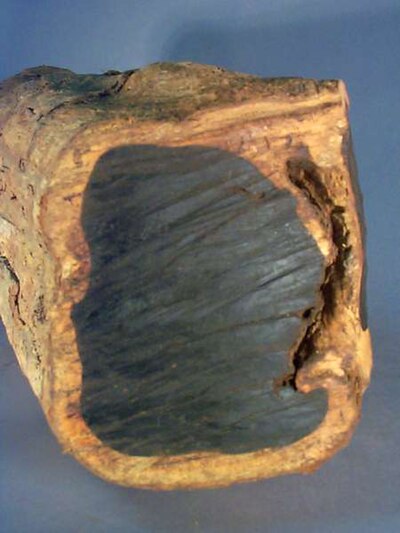 Ebony
Ebony is a dense black/brown hardwood, coming from several species in the genus Diospyros, which also contains the persimmons. Unlike most woods, ebony
Ebony (magazine)
Ebony is a monthly magazine that focuses on news, culture, and entertainment. Its target audience is the African-American community, and its coverage
Ebonics
Look up Ebonics in Wiktionary, the free dictionary. Ebonics may refer to: African-American Vernacular English, a distinctive lect, or variety, of English
Ebony Obsidian
Ebony Obsidian (born April 16, 1994) is an American actress. Obsidian was born and raised in New Paltz, New York. She is of Eritrean Habesha descent and
Ebony (disambiguation)
Look up Ebony or ebony in Wiktionary, the free dictionary. Ebony is a dense black hardwood. Ebony may also refer to: Ebony (magazine) Ebony (band), a
Rocky Johnson
winning Lawler's crown at one point. He also wrestled under a mask as "Sweet Ebony Diamond" in the Mid-Atlantic area. In 1982, Johnson feuded with Don Muraco
Ebony and Ivory (disambiguation)
"Ebony and Ivory" is a single by Paul McCartney and Stevie Wonder. Ebony and Ivory may also refer to: Ebony and Ivory (piano duo) Ebony and Ivory (Devil
Black Knight (Dane Whitman)
He encounters the spirit of Sir Percy of Scandia there and is given the Ebony Blade. He then encounters Doctor Strange and helps fight the extra-dimensional
Ebony Shoe
The Ebony Shoe award (Dutch: Ebbenhouten schoen, French: Soulier d'ébène) is a football award in Belgium given annually to the best African or African
Ebony and Ivory
"Ebony and Ivory" is a song that was released in 1982 as a single by Paul McCartney featuring Stevie Wonder. It was issued on 29 March that year as the