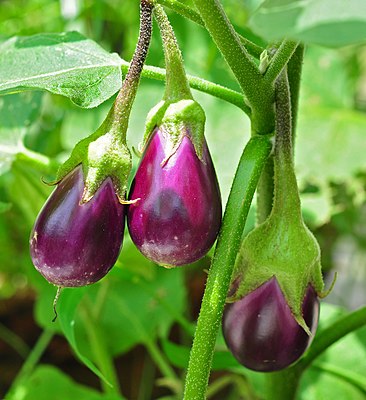 Eggplant
Look up aubergine, brinjal, or eggplant in Wiktionary, the free dictionary. Eggplant (US, Canada, Australia), aubergine (UK, Ireland) or brinjal (Indian
Eggplant emoji
The Eggplant emoji (🍆), also known by its Unicode name of Aubergine, is an emoji featuring a purple eggplant. It is one of the most commonly used emojis
Eggplant (color)
Eggplant is a dark purple or brownish-purple color that resembles the color of the outer skin of European eggplants. Another name for the color eggplant
Eggplant (disambiguation)
Look up eggplant or egg-plant in Wiktionary, the free dictionary. Eggplant (Solanum melongena; also named aubergine or brinjal) is a species of nightshade
Parmigiana
[melanˈdzaːne; -ˈtsaːne ˌalla parmiˈdʒaːna], or eggplant parmesan, is an Italian dish made with fried, sliced eggplant layered with cheese and tomato sauce, then
Baba ghanoush
consisting of finely chopped roasted eggplant, olive oil, lemon juice, various seasonings, and tahini. The eggplant is traditionally baked or broiled over
Thai eggplant
Thai eggplant (Thai: มะเขือ, RTGS: makhuea) is the name for several varieties of eggplant used in Southeast Asian cuisines, most often of the eggplant species
Nasubi
Hamatsu Tomoaki, born August 3, 1975), better known as Nasubi (なすび, "Eggplant"), is a Japanese comedian represented by Office K. Tomoaki Hamatsu was
Scarlet eggplant
The scarlet eggplant is a fruiting plant of the genus Solanum, related to the tomato and eggplant. Its green fruit is known as Gilo (Brazilian Portuguese:
List of eggplant dishes
a list of eggplant dishes. This list includes dishes in which the main ingredient or one of the essential ingredients is eggplant. Eggplant or aubergine