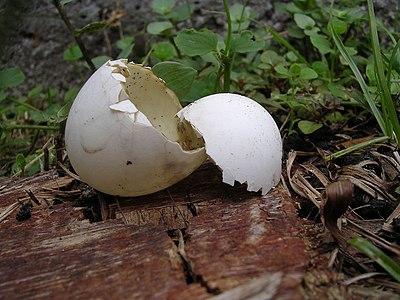 Eggshell
An eggshell is the outer covering of a hard-shelled egg and of some forms of eggs with soft outer coats. Nematode eggs present a two layered structure:
Eggshell (color)
The color eggshell is meant as a representation of the average color of a chicken egg. In interior design, the color eggshell is commonly used when one
Eggshell membrane
Eggshell membrane or shell membrane is the clear film lining eggshells, visible when one peels a boiled bird egg. Chicken eggshell membranes are used as
Robin egg blue
Robin egg blue, also called eggshell blue, is a shade of cyan (bluish-green color), approximating the shade of the eggs laid by the American robin. The
Eggshells (film)
Eggshells is a 1969 American independent experimental film directed by Tobe Hooper in his directorial debut. Hooper, who co-wrote the film with Kim Henkel
Eggshell skull
The eggshell rule (also thin skull rule, papier-mâché-plaintiff rule, or talem qualem rule) is a well-established legal doctrine in common law, used in
Eggshell (disambiguation)
Eggshell is the covering of an egg. Eggshell may also refer to: Eggshell (color), an off-white color Eggshells (film), an independent film released in
Brewery of Eggshells
Brewery of Eggshells is an Irish fairy tale collected in 1825 by Thomas Crofton Croker in his first volume of Fairy Legends and Traditions of the South
Eggshell membrane separation process
Eggshell membrane separation is a recycling process to separate the protein-rich eggshell membrane from the eggshell. Nearly 30% of the eggs consumed each
Hikikomori
Hikikomori (Japanese: ひきこもり or 引きこもり, lit. "pulling inward, being confined"), also known as acute social withdrawal, is total withdrawal from society and