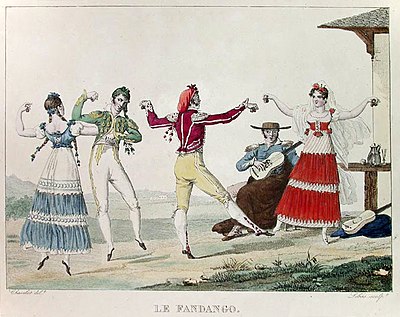 Fandango
Fandango is a lively partner dance originating in Portugal and Spain, usually in triple meter, traditionally accompanied by guitars, castanets, or hand-clapping
Fandango!
Fandango! is the fourth album by the American rock band ZZ Top, released in 1975. The album's first side consists of selections from live shows, with the
Grim Fandango
Grim Fandango is a 1998 adventure game directed by Tim Schafer and developed and published by LucasArts for Microsoft Windows. It is the first adventure
Fandango Media
Fandango Media, LLC is an American ticketing company that sells movie tickets via their website as well as through their mobile app, as well as a provider
Fandango (wrestler)
best known for his time in WWE, where he performed under the ring name Fandango. Hussey began his professional wrestling career in 1999. He competed in
Fandangos in Space
Fandangos in Space is the 1973 debut album by flamenco-rock band Carmen. Rock critic Ryan Reed has described their music as flamenco prog rock, "In a
Fandango (disambiguation)
to: Fandango, a 1928 film featuring Anita Garvin Fandango (1949 film), a French musical film Fandango, a 1969 film directed by John Hayes Fandango (1985
Circus Fandango
Circus Fandango (Norwegian: Cirkus Fandango) is a 1954 Norwegian drama film directed by Arne Skouen. It was entered into the 1954 Cannes Film Festival
Hanging
Hanging is the suspension of a person by a noose or ligature around the neck. The Oxford English Dictionary states that hanging in this sense is "specifically
Club Fandango
Club Fandango is a live music promotions company based in Highbury, London. It was started in 2001, by Simon Williams and Andy MacLeod. The former runs