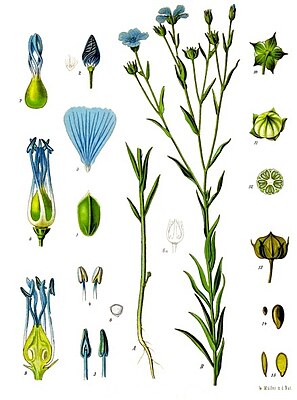 Flax
Flax, also known as common flax or linseed, is a flowering plant, Linum usitatissimum, in the family Linaceae. It is cultivated as a food and fiber crop
Flax (disambiguation)
up flax in Wiktionary, the free dictionary. Flax (Linum usitatissimum) is a plant cultivated for food and fiber in cooler regions of the world. Flax may
Flax (color)
Flax or Flaxen is a pale yellowish-gray, the color of straw or unspun dressed flax. The first recorded use of flax as a color name in English was in 1915
Holly Flax
Hollis Partridge "Holly" Scott (née Flax) is a fictional character from the US television series The Office, played by Amy Ryan. She is an original character
Linseed oil
as flaxseed oil or flax oil (in its edible form), is a colourless to yellowish oil obtained from the dried, ripened seeds of the flax plant (Linum usitatissimum)
Linen
Linen (/ˈlɪnən/) is a textile made from the fibers of the flax plant. Linen is very strong, absorbent, and dries faster than cotton. Because of these properties
Asbestos
Asbestos (/æsˈbɛstɒs, æz-, -təs/) is a naturally occurring fibrous silicate mineral. There are six types, all of which are composed of long and thin fibrous
Toadflax
Toadflax is the common name of several related genera of plants in the family Plantaginaceae, including: Anarrhinum Antirrhinum, also called Snapdragon
Flax Island
Flax Island was an island located by Otego, New York, on the Susquehanna River below the mouth of Flax Island Creek. In a deed from 1807 it is called Flax
Flax in New Zealand
New Zealand flax describes the common New Zealand perennial plants Phormium tenax and Phormium colensoi, known by the Māori names harakeke and wharariki