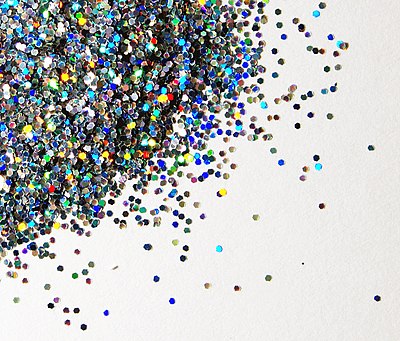 Glitter
Glitter is an assortment of small, reflective particles that come in a variety of shapes, sizes, and colors. Glitter particles reflect light at different
Gary Glitter
Paul Francis Gadd (born 8 May 1944), known professionally as Gary Glitter, is an English former glam rock singer who achieved success in the 1970s and
Glitter (soundtrack)
Glitter is the soundtrack to the 2001 film of the same title and the eighth studio album by American singer-songwriter Mariah Carey. It was released on
Glitter (film)
Glitter is a 2001 American romantic musical drama film starring Mariah Carey and rapper Da Brat, written by Kate Lanier, and directed by Vondie Curtis
Glitter (disambiguation)
Look up glitter or glittering in Wiktionary, the free dictionary. Glitter is a mixture of shiny, flat reflective particles. Glitter may also refer to:
Glitter bombing
Glitter bombing is an act of protest in which activists throw glitter on people at public events. Glitter bombers have frequently been motivated by, though
Glam rock
outrageous costumes, makeup, and hairstyles, particularly platform shoes and glitter. Glam artists drew on diverse sources across music and throwaway pop culture
Glitter Gulch
Glitter Gulch may refer to: "Glitter Gulch", a nickname for the casino area along Fremont Street in downtown Las Vegas "Glitter Gulch", a nickname for
Disco ball
A disco ball (also known as a mirror ball or glitter ball) is a roughly spherical object that reflects light directed at it in many directions, producing
All that glitters is not gold
"All that glitters is not gold" is an aphorism stating that not everything that looks precious or true turns out to be so. While early expressions of the