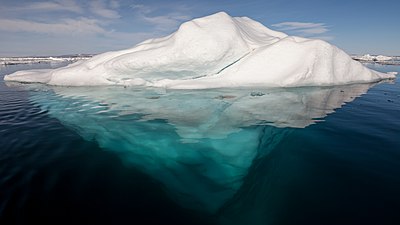 Iceberg
An iceberg is a piece of freshwater ice more than 15 m long that has broken off a glacier or an ice shelf and is floating freely in open (salt) water
Iceberg Slim
Robert Moppins Jr.; August 4, 1918 – April 30, 1992), better known as Iceberg Slim, was a former American pimp who later became a writer. Beck's novels
Iceberg B-15
Iceberg B-15 was the largest recorded iceberg by area. It measured around 295 by 37 kilometres (159 by 20 nautical miles), with a surface area of 11,000
The Icebergs
The Icebergs is an 1861 oil painting by the American landscape artist Frederic Edwin Church. It was inspired by his 1859 voyage to the North Atlantic around
Iceberg theory
The iceberg theory or theory of omission is a writing technique coined by American writer Ernest Hemingway. As a young journalist, Hemingway had to focus
Apache Iceberg
Apache Iceberg is an open source high-performance format for huge analytic tables. Iceberg brings the reliability and simplicity of SQL tables to big
Iceberg A-76
world's largest floating iceberg, calved from the Filchner–Ronne Ice Shelf in Antarctica. According to the news, the new iceberg, effectively a piece of
Iceberg (disambiguation)
Look up iceberg in Wiktionary, the free dictionary. An iceberg is a large piece of ice that has broken off from a snow-formed glacier or ice shelf, and
Tip of the iceberg
tip of the iceberg in Wiktionary, the free dictionary. Tip of the iceberg may refer to: Tip of the iceberg, the top tenth portion of an iceberg, which floats
Iceberg A-68
Iceberg A-68 was a giant tabular iceberg adrift in the South Atlantic, having calved from Antarctica's Larsen C ice shelf in July 2017. By 16 April 2021