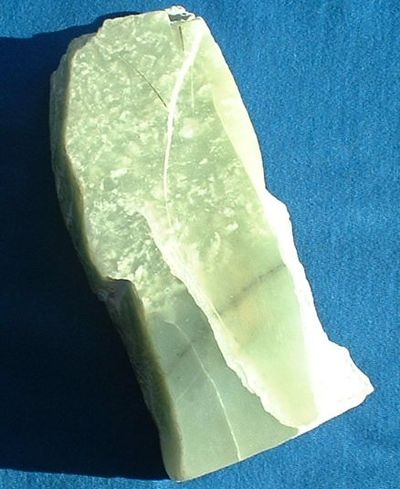 Jade
Jade is a mineral used as jewellery or for ornaments. It is typically green, although may be yellow or white. Jade can refer to either of two different
Jade (disambiguation)
Look up Jade or jade in Wiktionary, the free dictionary. Jade is an ornamental stone. Jade may also refer to: Jade (given name), including lists of people
Jade Cargill
Jade Cargill (born June 3, 1992) is an American professional wrestler. She is signed to All Elite Wrestling (AEW), where she is the inaugural and current
Jade Emperor
The Jade Emperor or Yudi (Chinese: 玉皇; pinyin: Yù Huáng; Pe̍h-ōe-jī: Gio̍k-hông or Chinese: 玉帝; Pe̍h-ōe-jī: Gio̍k-tè, Yù Dì) in Chinese culture, traditional
Jade Jagger
Jade Sheena Jezebel Jagger (born 21 October 1971) is a British-French jewellery designer, home designer, and former model. She is the daughter of Rolling
Olivia Jade
Olivia Jade Giannulli (born September 28, 1999) is an American YouTuber, and daughter of fashion designer Mossimo Giannulli and actress Lori Loughlin.
Jade Laroche
Jade Laroche (born 8 September 1989) is a French model, DJ and former pornographic actress. Born in Rouen, where she lived until the age of 10 years, Laroche
Jade Thirlwall
Jade Amelia Thirlwall (born 26 December 1992) is an English singer-songwriter. She rose to prominence in the 2010s as a member of Little Mix, one of the
Chinese jade
Chinese jade refers to the jade mined or carved in China from the Neolithic onward. It is the primary hardstone of Chinese sculpture. Although deep and
Jade Goody
Jade Cerisa Lorraine Goody (5 June 1981 – 22 March 2009) was an English television personality. She came to public prominence in 2002 when she appeared