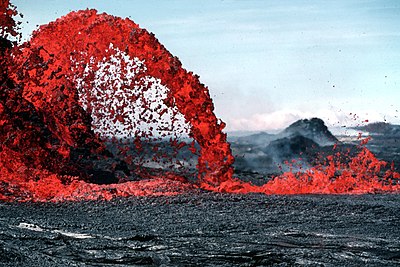 Lava
Lava is molten or partially molten rock (magma) that has been expelled from the interior of a terrestrial planet (such as Earth) or a moon onto its surface
Lava (disambiguation)
Look up Lava or lava in Wiktionary, the free dictionary. Lava is molten volcanic rock or the resulting solid rock after cooling. Lava or LAVA also refer
Lava lamp
A lava lamp is a decorative lamp, invented in 1963 by British entrepreneur Edward Craven Walker, the founder of the lighting company Mathmos. It consists
Lava Lava (singer)
popularity known by his stage name Lava Lava is a Tanzanian singer signed under WCB Wasafi record label. Lava Lava joined Tanzania House of Talents (THT)
Lava dome
In volcanology, a lava dome is a circular mound-shaped protrusion resulting from the slow extrusion of viscous lava from a volcano. Dome-building eruptions
Lava (color)
Lava #CF1020 Lava is a color that is a shade of orange. It is named after the color of volcanic lava. This is the color (color #CF1020, shown at right)
Lava (soap)
Lava is a heavy-duty hand cleaner in soap bar form manufactured by the WD-40 Company. Unlike typical soap bars, Lava contains ground pumice, which gave
Lavas
Look up lavas in Wiktionary, the free dictionary. Lavas may refer to Lava Lavaş (lavash) flatbread Lavaş cheese produced in Turkey Manne Lavås (born 1944)
Basalt
rock formed from the rapid cooling of low-viscosity lava rich in magnesium and iron (mafic lava) exposed at or very near the surface of a rocky planet
Shield volcano
eruption of highly fluid (low viscosity) lava, which travels farther and forms thinner flows than the more viscous lava erupted from a stratovolcano. Repeated