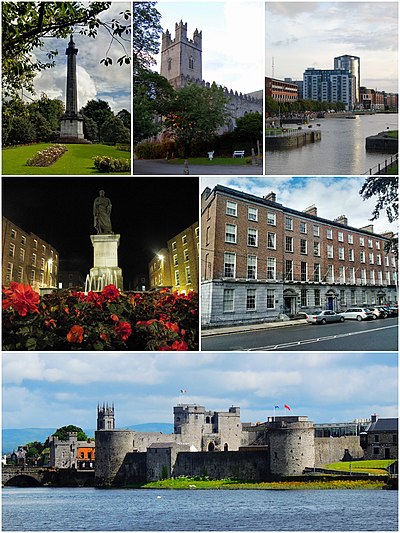 Limerick
Limerick (/ˈlɪmərɪk/ LIM-ər-ik; Irish: Luimneach [ˈl̪ˠɪmʲ(ə)nʲəx]) is a western city in Ireland situated within County Limerick. It is in the province
Limerick (poetry)
A limerick (/ˈlɪmərɪk/ LIM-ər-ik) is a form of verse, usually humorous and frequently rude, in five-line, predominantly anapestic trimeter with a strict
County Limerick
County Limerick (Irish: Contae Luimnigh) is a western county in Ireland. It is in the province of Munster and is located in the Mid-West which comprises
Limerick F.C.
Limerick Football Club (Irish: Club Peile Luimnigh) was an association football club based in Limerick, Ireland who played in the League of Ireland and
Limerick boycott
The Limerick boycott, also known as the Limerick pogrom, was an economic boycott waged against the small Jewish community in Limerick, Ireland, between
Limerick Soviet
The Limerick Soviet (Irish: Sóibhéid Luimnigh) was one of a number of self-declared Irish soviets that were formed around Ireland circa 1919. The Limerick
Siege of Limerick
Siege of Limerick may refer to: Siege of Limerick (1642), English Protestants surrendered to Confederate Catholics Siege of Limerick (1650–1651), Confederate
History of Limerick
The history of Limerick stretches back to its establishment by Vikings as a walled city on King's Island (an island in the River Shannon) in 812, and to
University of Limerick
The University of Limerick (UL) (Irish: Ollscoil Luimnigh) is a public research university institution in Limerick, Ireland. Founded in 1972 as the National
Limerick GAA
The Limerick County Board of the Gaelic Athletic Association (GAA) (Irish: Cumann Lúthchleas Gael, Coiste Chontae Luimneach) or Limerick GAA is one of