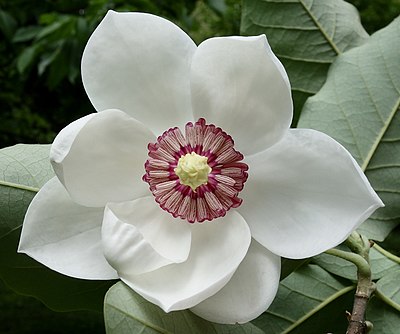 Magnolia
Magnolia is a large genus of about 210 to 340 flowering plant species in the subfamily Magnolioideae of the family Magnoliaceae. It is named after French
Magnolia (film)
Magnolia is a 1999 American drama film written, directed and co-produced by Paul Thomas Anderson. It stars an ensemble cast, including Jeremy Blackman
Magnolia liliiflora
Variously known by many names, including Mulan magnolia, purple magnolia, red magnolia, lily magnolia, tulip magnolia and woody-orchid, it was first introduced
Magnolia (disambiguation)
Look up Magnolia, magnolia, or magnólia in Wiktionary, the free dictionary. Magnolia is a genus of flowering plants. Magnolia or The Magnolia may also
Magnolia × soulangeana
Magnolia × soulangeana (Magnolia denudata × Magnolia liliiflora), the saucer magnolia, is a hybrid flowering plant in the genus Magnolia and family Magnoliaceae
Magnolia Shorty
2010), known by the stage name Magnolia Shorty, was an American rapper in the New Orleans-based bounce music scene. Magnolia Shorty and Ms. Tee (Trishell
Magnolia grandiflora
Magnolia grandiflora, commonly known as the southern magnolia or bull bay, is a tree of the family Magnoliaceae native to the southeastern United States
Magnolia sieboldii
Magnolia sieboldii, or Siebold's magnolia, also known as Korean mountain magnolia and Oyama magnolia, is a species of Magnolia native to east Asia in China
Magnolia (color)
Magnolia is a colour named after the flowering plant of the genus Magnolia. As magnolias have flowers of more than one colour, mainly cream or pale purple
Magnolia virginiana
Magnolia virginiana, most commonly known as sweetbay magnolia, or merely sweetbay (also laurel magnolia, swampbay, swamp magnolia, white bay, or beaver