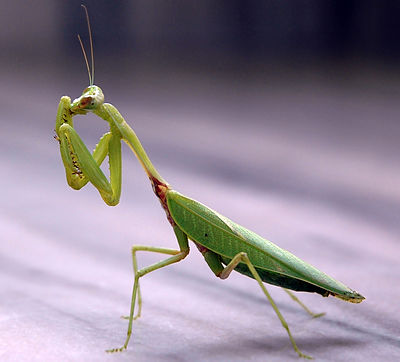 Mantis
Mantises are an order (Mantodea) of insects that contains over 2,400 species in about 460 genera in 33 families. The largest family is the Mantidae ("mantids")
Mantis shrimp
Mantis shrimp, or stomatopods, are carnivorous marine crustaceans of the order Stomatopoda, branching from other members of the class Malacostraca around
Mantis (disambiguation)
Mantis is the common name of any insect in the order Mantodea, also commonly known as praying mantises. Mantis may also refer to: Mantis (genus), a genus
Stick mantis
Stick mantis and twig mantis are common names applied to numerous species of mantis that mimic sticks or twigs as camouflage. Often the name serves to
African mantis
African mantis and African praying mantis are common names for many species of praying mantis native to Africa. The following genera and species are often
Mantis (Marvel Comics)
Mantis is a fictional character primarily appearing in American comic books published by Marvel Comics. The character has been depicted as a member of
Bark mantis
Theopompa sp. (Asian bark mantises) Dead leaf mantis Flower mantis Grass mantis Leaf mantis Shield mantis Stick mantis List of mantis genera and species "Tanzanian
Nächstbereichschutzsystem MANTIS
MANTIS Air Defence System (modular, automatic and network capable targeting and interception system), formerly titled as NBS-C-RAM (Nächstbereichschutzsystem
Marcos Mantis
The original Marcos Mantis is a sports car produced by the British car company Marcos Engineering. It was formally introduced in 1968, although production
Squilla mantis
Squilla mantis is a species of mantis shrimp found in shallow coastal areas of the Mediterranean Sea and the Eastern Atlantic Ocean: it is also known