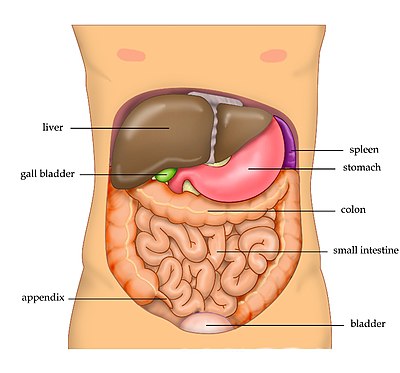 Liver
The liver is a major organ only found in vertebrates which performs many essential biological functions such as detoxification of the organism, and the
Cirrhosis
Cirrhosis, also known as liver cirrhosis or hepatic cirrhosis, and end-stage liver disease, is the impaired liver function caused by the formation of scar
Fatty liver disease
Fatty liver disease (FLD), also known as hepatic steatosis, is a condition where excess fat builds up in the liver. Often there are no or few symptoms
Liver disease
Liver disease, or hepatic disease, is any of many diseases of the liver. If long-lasting it is termed chronic liver disease. Although the diseases differ
Liver function tests
Liver function tests (LFTs or LFs), also referred to as a hepatic panel, are groups of blood tests that provide information about the state of a patient's
Liver cancer
primary (starts in liver) or secondary (meaning cancer which has spread from elsewhere to the liver, known as liver metastasis). Liver metastasis is more
Liver failure
Liver failure is the inability of the liver to perform its normal synthetic and metabolic functions as part of normal physiology. Two forms are recognised
Cod liver oil
Cod liver oil is a dietary supplement derived from liver of cod fish (Gadidae). As with most fish oils, it contains the omega-3 fatty acids eicosapentaenoic
Lobes of liver
In human anatomy, the liver is divided grossly into four parts or lobes: the right lobe, the left lobe, the caudate lobe, and the quadrate lobe. Seen
Liver (food)
Lieuwer "liver", West Frisian lever "liver", Dutch lever "liver", German Leber "liver", Danish , Norwegian and Swedish language lever "liver" the last