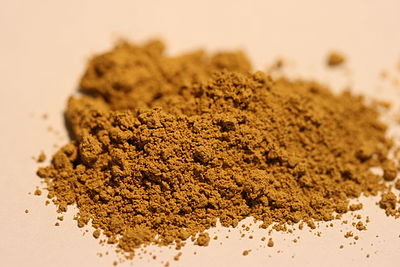 Ochre
Ochre (/ˈoʊkər/ OH-kər; from Ancient Greek ὤχρα (ṓkhra), from ὠχρός (ōkhrós) 'pale'), or ocher in American English, is a natural clay earth pigment, a
Ochre (disambiguation)
Look up ochre in Wiktionary, the free dictionary. Ochre is a natural pigment and associated color. Ochre or Ocher may also refer to: Ochre (musician) (born
Ochre Court
Ochre Court is a large châteauesque mansion in Newport, Rhode Island, United States. Commissioned by Ogden Goelet, it was built at a cost of $4.5 million
Pisaster ochraceus
Pisaster ochraceus, generally known as the purple sea star, ochre sea star, or ochre starfish, is a common seastar found among the waters of the Pacific
Ochre Health
Ochre Health is an Australian healthcare services company headquartered in Sydney. The company specialises in the provision of health services to outer-urban
Ochre Coloured Pottery culture
The Ochre Coloured Pottery culture (OCP) is a Bronze Age culture of the Indo-Gangetic Plain "generally dated 2000–1500 BCE," extending from eastern Punjab
Stop codon
this second stop codon was given the name of "ochre", an orange-reddish-brown mineral pigment. Ochre mutant viruses had a property similar to amber mutants
Ochre (musician)
Ochre is the stage name of English electronic musician Christopher Leary. The name "Ochre" was originally adopted as the title for Leary's academic work
Yamnaya culture
культура lit. 'culture of pits'), also known as the Pit Grave culture or Ochre Grave culture, was a late Copper Age to early Bronze Age archaeological
Ochre Pits
The Ochre Pits are a popular tourist destination in Australia's Northern Territory, approximately 100 kilometres west of Alice Springs along the Larapinta