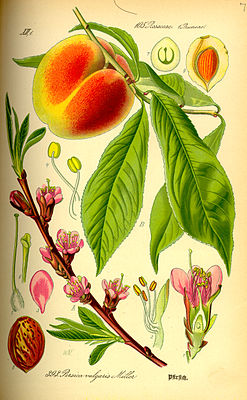 Peach
The peach (Prunus persica) is a deciduous tree first domesticated and cultivated in Zhejiang province of Eastern China. It bears edible juicy fruits with
Peach pit
A peach pit is the pit or stone of a peach. Peach pit or peachpit may also refer to: Peach-Pit, a manga artist duo Peach Pit, a Canadian indie pop band
Peach (singer)
Peach (born Patricia Elaine Reasoner; June 1, 1951) is an American blues and jazz artist – singer, songwriter, and guitarist, and producer. She currently
Princess Peach
Princess Peach Toadstool is a fictional character in Nintendo's Mario franchise, created by Shigeru Miyamoto and introduced in the 1985 original Super
Peach (color)
Peach is a color that is named for the pale color of the interior flesh of the peach fruit. This name may also be substituted for "peachy". Like the color
Flat peach
doughnut peach or donut peach, paraguayo peach, pan tao peach, saucer peach, flat peach, belly-up peach, UFO peach, Chinese flat peach, hat peach, anjeer
James and the Giant Peach (film)
James and the Giant Peach is a 1996 musical fantasy film directed by Henry Selick, based on the 1961 novel of the same name by Roald Dahl. It was produced
Peach Pit (band)
Peach Pit is an indie pop band from Vancouver, British Columbia, Canada. The band consists of singer and rhythm guitarist Neil Smith, lead guitarist Christopher
James and the Giant Peach
James and the Giant Peach is a popular children's novel written in 1961 by British author Roald Dahl. The first edition, published by Alfred Knopf, featured
Peach Melba
Peach Melba (French: pêche Melba, pronounced [pɛʃ mɛl.ba]) is a dessert of peaches and raspberry sauce with vanilla ice cream. It was invented in 1892