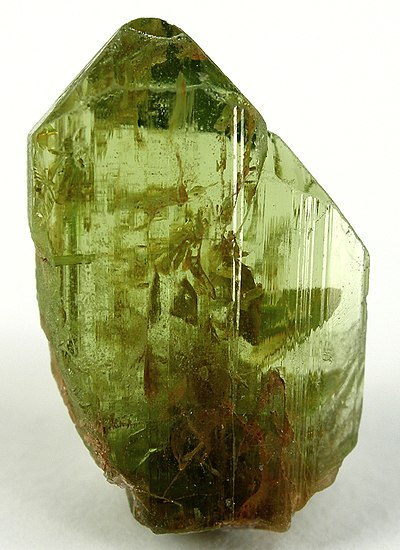 Peridot
Peridot (/ˈpɛr.ɪˌdɒt, -ˌdoʊ/ PERR-ih-dot, -⁠doh), sometimes called chrysolite, is a deep yellowish-green transparent variety of olivine. Peridot is one
Peridot (disambiguation)
Peridot is a mineral. Peridot may also refer to: Peridot, Arizona, a census-designated place Peridot Mesa, Arizona HMT Peridot (FY 198), a British Second
Niantic, Inc.
Niantic announced launching a new smartphone AR game Peridot, set to be launched later in 2022. Peridot open beta was initially released in Norway on July
Lime (color)
pencils. The color peridot is a shade of lime with lemon undertones, which represents the color of the peridot gemstone. Peridot is the birthstone for
Shelby Rabara
both an actress and a dancer. Rabara is known for providing the voice of Peridot for the Steven Universe franchise on Cartoon Network. Rabara was born in
Olivine
mitigation. Olivine also has many other historical uses, such as the gemstone peridot (or chrysolite), as well as industrial applications like metalworking processes
Peridot, Arizona
population was 1,350 at the 2010 census. Peridot is named for the mineral peridot, found in basalt flows nearby. Peridot is located in southeastern Gila County
Birthstone
Alexandrite, one of three June birthstones Ruby, the birthstone for July Peridot, the modern birthstone for August Sardonyx, the traditional birthstone
Hull triple trawler tragedy (1968)
on 11 January by another ship, but had not been passed on. The Kingston Peridot had also sailed from Hull on 10 January with a crew of 20, and by 26 January
Steven Universe Future
Pearl/Volleyball, Shell, Brandish, Mega Pearl and Aubergine Pearl Shelby Rabara as Peridot Tom Scharpling as Greg Universe Grace Rolek as Connie Maheswaran Charlyne