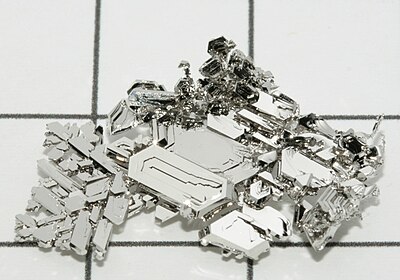 Platinum
Platinum is a chemical element with the symbol Pt and atomic number 78. It is a dense, malleable, ductile, highly unreactive, precious, silverish-white
Music recording certification
certification categories, which are named after precious materials (gold, platinum and diamond). The threshold required for these awards depends upon the
Platinum End
Platinum End (Japanese: プラチナエンド, Hepburn: Purachina Endo) is a Japanese manga series written by Tsugumi Ohba and illustrated by Takeshi Obata. It was serialized
Platinum jubilee
A platinum jubilee is a celebration held to mark an anniversary. Among monarchies, it usually refers to a 70th anniversary. The most recent monarch to
Platinum (disambiguation)
up platinum, platinic, or platinous in Wiktionary, the free dictionary. Platinum is a chemical element with symbol Pt and atomic number 78. Platinum may
Pokémon Platinum
Pokémon Platinum Version is a 2008 role-playing video game developed by Game Freak, published by The Pokémon Company and Nintendo for the Nintendo DS handheld
Platinum Blonde
Look up platinum blonde in Wiktionary, the free dictionary. Platinum blonde is a color of blonde hair. Platinum Blonde may also refer to: Platinum Blonde
Platinum Pudding
The Platinum Pudding is a British pudding consisting of a lemon and amaretti trifle. It was created by Jemma Melvin in 2022 for a competition celebrating
Platinum Jubilee of Elizabeth II
The Platinum Jubilee of Elizabeth II was the international celebration in 2022 marking the 70th anniversary of the accession of Queen Elizabeth II on 6
Platinum group
The platinum-group metals (abbreviated as the PGMs; alternatively, the platinoids, platinides, platidises, platinum group, platinum metals, platinum family