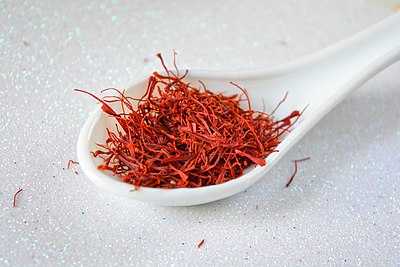 Saffron
Saffron (/ˈsæfrən, -rɒn/) is a spice derived from the flower of Crocus sativus, commonly known as the "saffron crocus". The vivid crimson stigma and styles
Saffron (color)
Saffron is a shade of yellow or orange, the colour of the tip of the saffron crocus thread, from which the spice saffron is derived. The hue of the spice
Saffron Burrows
Saffron Domini Burrows (born 22 October 1972) is an English actress and model who has appeared in films such as Circle of Friends, Wing Commander, Deep
Saffron (disambiguation)
Look up saffron or Saffron in Wiktionary, the free dictionary. Saffron is a spice. Saffron may also refer to: Saffron (trade), the business of producing
Saffron rice
Saffron rice is a dish made from saffron, white rice and also usually vegetable bouillon. Saffron rice is found in the cuisines of many countries (in
Abe Saffron
Abraham Gilbert Saffron (6 October 1919 – 15 September 2006) was an Australian hotelier, nightclub owner and property developer who was one of the major
Saffron Henderson
Saffron Henderson (born September 25, 1965) is a Canadian voice actress and singer who often works with Ocean Productions in numerous anime dubs. Henderson
Saffron terror
Saffron terror is a neologism used to describe acts of violence motivated by Hindutva. Hindu extremism is usually perpetrated by members, or alleged members
Use of saffron
Saffron is a key seasoning, fragrance, dye, and medicine in use for over three millennia. One of the world's most expensive spices by weight, saffron
Saffron bun
A saffron bun, Cornish tea treat bun or revel bun, is a rich, spiced yeast-leavened sweet bun that is flavoured with saffron and contains dried fruit including