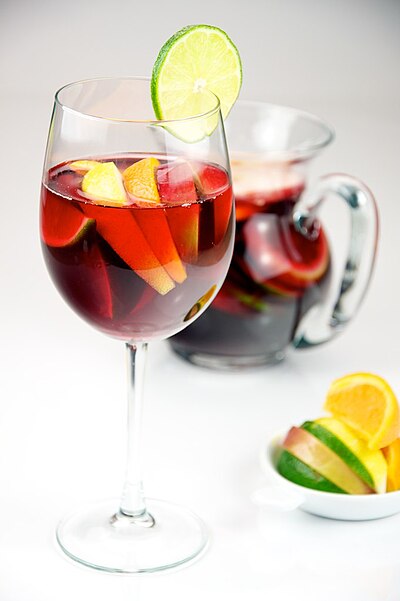 Sangria
Sangria (English: /sæŋˈɡriːə/, Spanish: sangría [sãŋˈɡɾi.a], Portuguese: sangria [sɐ̃ˈɡɾi.ɐ]) is an alcoholic beverage originating in Spain and Portugal
Sangria Señorial
Sangría Señorial is a sangria-flavored, non-alcoholic beverage produced by Mezgo S.A de C.V in Mexico since 1960. It is made with wine grapes, essence
Sangria (disambiguation)
Sangria is a drink. It may also refer to: Sangria: A Recipe for Love, novel by Manuela Requena "Sangria" by Blake Shelton "Sangria" by Tania Maria Composed
Sangria (song)
"Sangria" is a song recorded by American country music artist Blake Shelton. It was released to country radio on April 6, 2015, as the third single from
Sangria Wine
"Sangria Wine" is a song by American singers Pharrell Williams and Camila Cabello, released as a single on May 18, 2018. It was written and produced by
Reál Sangria
Reál Sangria is a fruity Spanish sangria produced from Spanish red wine and a blend of natural citrus fruit flavours. It is predominantly made from the
Hermosita sangria
Hermosita sangria is a brightly coloured species of sea slug, specifically an aeolid nudibranch. It is a marine gastropod mollusc in the family Facelinidae
Ave Sangria
Ave Sangria is a Brazilian rock band and one of the leading names of the 1970s psychedelic music scene of Pernambuco, along with Alceu Valença, Flaviola
Sangria: A Recipe for Love
Sangria: A Recipe for Love is a 2009 novel written by Manuela Requena (ISBN 978-0979811678). It has been described as "the first ever book about cookery
Climax (2018 film)
group's celebratory after-party takes a dark turn when the communal bowl of sangria is spiked with LSD, sending each of the dancers into agitated, confused