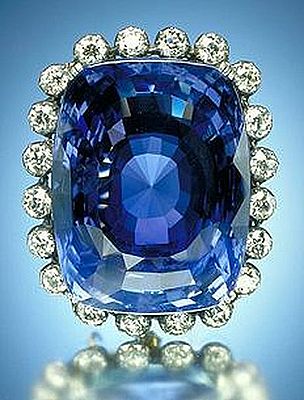 Sapphire
Sapphire is a precious gemstone, a variety of the mineral corundum, consisting of aluminium oxide (α-Al2O3) with trace amounts of elements such as iron
Bombay Sapphire
Bombay Sapphire is a brand of gin that is distilled by the Bombay Spirits Company, a subsidiary company of Bacardi, at Laverstoke Mill in the village of
Pokémon Omega Ruby and Alpha Sapphire
Ruby and Pokémon Alpha Sapphire are 2014 remakes of the 2002 Game Boy Advance role-playing video games Pokémon Ruby and Sapphire, also including features
Sapphire (color)
the color sapphire are blue sapphire or sapphire blue, shown below. Displayed at right is the color sapphire. The first recorded use of sapphire as a color
Sapphire Lake
Sapphire Lake can refer to the following lakes in the United States: Sapphire Lake (Fresno County, California), near Mount Fiske Sapphire Lake (Trinity
Sapphire jubilee
In 2017, the term sapphire jubilee or blue sapphire jubilee was coined for the celebrations to mark the 65th anniversary of the reign of Queen Elizabeth
Sapphire & Steel
Sapphire & Steel is a British television supernatural sci-fi/fantasy series starring David McCallum as Steel and Joanna Lumley as Sapphire. Produced by
Pokémon Ruby and Sapphire
Pokémon Ruby Version and Pokémon Sapphire Version are 2002 role-playing video games developed by Game Freak, published by The Pokémon Company and Nintendo
Sapphire Rapids
Sapphire Rapids is a codename for Intel's fourth generation Xeon server processors based on Intel 7, which is a rebranded 10 nm Enhanced SuperFin process
SAPPHIRE
SAPPHIRE (Stanford AudioPhonic PHotographic IR Experiment, also called Navy-OSCAR 45) was a satellite built by the Stanford University students in Palo