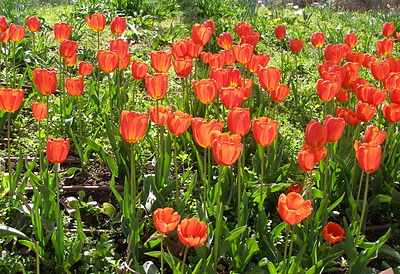 Tulip
Tulips (Tulipa) are a genus of spring-blooming perennial herbaceous bulbiferous geophytes (having bulbs as storage organs). The flowers are usually large
Tulip (disambiguation)
American Tulip tree (Liriodendron tulipifera). Tulip or Tulips may also refer to: Tulip (album), a 1990 album by Steel Pole Bath Tub "Tulips" (song),
Tulip mania
Tulip mania (Dutch: tulpenmanie) was a period during the Dutch Golden Age when contract prices for some bulbs of the recently introduced and fashionable
Tulip Fever
Tulip Fever is a 2017 historical romantic drama film directed by Justin Chadwick and written by Deborah Moggach and Tom Stoppard, adapted from Moggach's
Tulip Siddiq
Tulip Rizwana Siddiq FRSA MP (Bengali: টিউলিপ রেজওয়ানা সিদ্দীক; born 16 September 1982) is a British politician serving as the Member of Parliament (MP)
Tulip (name)
Tulip is a given name and a surname which may refer to: Tulip Joshi (born 1980), Bollywood actress Tulip Mazumdar (born c. 1981), British journalist and
Indira Gandhi Memorial Tulip Garden
Memorial Tulip garden, previously Model Floriculture Center, is a tulip garden in Srinagar, Jammu and Kashmir, India. It is the largest tulip garden in
Black Tulip
Tulip may refer to: Operation Black Tulip, a 1945 plan to forcibly evict all Germans from the Netherlands The Black Tulip, an 1850 novel Black Tulip (plane)
Tulip Computers
Tulip Computers NV was a Dutch computer manufacturer that manufactured PC clones. It was founded in 1979 as Compudata, as an importer of American microcomputers
Tulip Joshi
Tulip Joshi is a former Indian actress and a businesswoman. She has appeared in Hindi, Kannada, Punjabi, Malayalam and Telugu films. Joshi was born in