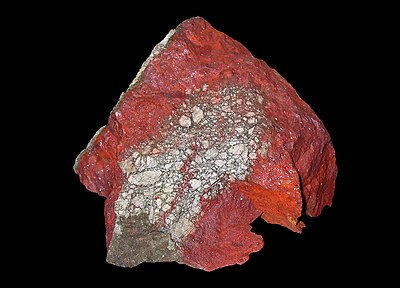 Cinnabar
Cinnabar (/ˈsɪnəˌbɑːr/), or cinnabarite (/sɪnəˈbɑːraɪt/), from the Ancient Greek: κιννάβαρι (kinnabari), is the bright scarlet to brick-red form of mercury(II)
Cinnabar (disambiguation)
Cinnabar is the common bright scarlet to brick-red form of mercury(II) sulfide. Cinnabar may also refer to: Cinnabar, the color of the mineral Cinnabar
Cinnabar moth
The cinnabar moth (Tyria jacobaeae) is a brightly coloured arctiid moth found as a native species in Europe and western and central Asia then east across
Vermilion
made, since antiquity until the 19th century, from the powdered mineral cinnabar (a form of mercury sulfide, which is toxic) and its corresponding color
Mercury sulfide
crystal forms: red cinnabar (α-HgS, trigonal, hP6, P3221) is the form in which mercury is most commonly found in nature. Cinnabar has rhombohedral crystal
Julius Evola
madness. In 1922, at 23 years old, he considered suicide, he wrote in The Cinnabar Path. He said he avoided suicide thanks to a revelation he had while reading
Shades of red
brilliant red or scarlet pigment, originally made from the powdered mineral cinnabar (). It was widely used in the art and decoration of Ancient Rome, in the
Cinnabar boobook
The cinnabar boobook (Ninox ios), also known as the cinnabar hawk-owl, is a hawk-owl endemic to the island of Sulawesi, Indonesia. It was described as
Little Zaches called Cinnabar
Little Zaches Called Cinnabar (German: Klein Zaches genannt Zinnober) is a 1819 satirical fairytale fantasy novella by E. T. A. Hoffmann. Out of pity the
Cinnabar, Queensland
Cinnabar is a rural locality in the Gympie Region, Queensland, Australia. In the 2016 census, Cinnabar had a population of 72 people. The Wide Bay Highway