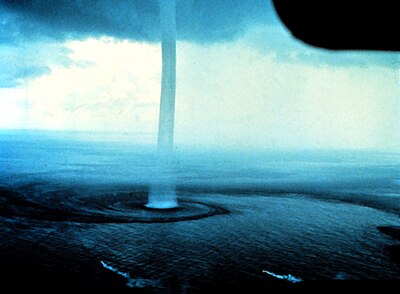 Waterspout
A waterspout is an intense columnar vortex (usually appearing as a funnel-shaped cloud) that occurs over a body of water. Some are connected to a cumulus
Landfall
tornadic waterspout makes landfall it is reclassified as a tornado, which can subsequently cause damage to areas inland. When a fair weather waterspout makes
Tornado
tornadoes include the multiple vortex tornado, landspout, and waterspout. Waterspouts are characterized by a spiraling funnel-shaped wind current, connecting
Tornadoes of 2022
morning hours of January 16, most of which were the result of tornadic waterspouts moving onshore. A strong EF2 tornado caused major damage to three mobile
Cyclone
as warm core cyclones over land, and can lead to tornado formation. Waterspouts can also form from mesocyclones, but more often develop from environments
Itsy Bitsy Spider
of a spider as it ascends, descends, and reascends the downspout or "waterspout" of a gutter system (or, alternatively, the spout of a teapot or open-air
Rain of animals
in many countries throughout history. One hypothesis is that tornadic waterspouts sometimes pick up creatures such as fish or frogs, and carry them for
Ginger Zee
Adeline Wesner. Zee said she chose to be a meteorologist because "I saw a waterspout on Lake Michigan when I was eight... I was mesmerized. I really thought
2012 Hawaii hailstorm
rainfall received, a tornadic waterspout formed off the coast of Oahu during the morning of March 9, 2012. Non-supercullar waterspouts are not uncommon (the State
Väinö Raitio
Proposal) (1934–1936) Kaksi kuningatarta (The Two Queens') Ballet The Waterspout (Vesipatsas) Le ballet grotesque Isolammi, Hanna (17 June 2019). Väinö