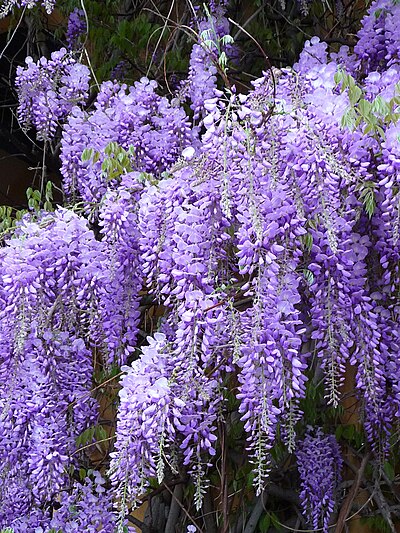 Wisteria
Wisteria is a genus of flowering plants in the legume family, Fabaceae (Leguminosae). The genus includes four species of woody twining vines that are native
Wisteria floribunda
Wisteria floribunda, common name Japanese wisteria (藤, fuji), is a species of flowering plant in the family Fabaceae, native to Japan. (Wisteriopsis japonica
Wisteria Lane
Wisteria Lane is the name of a fictional street at the center of U.S. television drama series Desperate Housewives. Desperate Housewives storylines primarily
Wisteria (disambiguation)
Look up wisteria in Wiktionary, the free dictionary. Wisteria is a genus of flowering plants. Wisteria may also refer to: Wisteria (color), a light medium
Wisteria sinensis
Wisteria sinensis, commonly known as the Chinese wisteria, is a species of flowering plant in the pea family, native to China, in the provinces of Guangxi
Wisteria Lodge
Wisteria Lodge may refer to: Wisteria Lodge (Reading, Massachusetts), a historic house "The Adventure of Wisteria Lodge", a Sherlock Holmes story This
Lavender (color)
term lavender blue as a color term was in 1926. The color wisteria is displayed at right. Wisteria, a light medium violet color is equivalent to light lavender
Wisteria frutescens
Wisteria frutescens, commonly known as American wisteria, is a woody, deciduous, perennial climbing vine, one of various wisterias of the family Fabaceae
David Lynch
Lynch was working on a new project for Netflix under the working titles Wisteria and Unrecorded Night. He was set to write and direct 13 episodes with an
Hygrophila difformis
Hygrophila difformis, commonly known as water wisteria (though it is not closely related to true wisteria), is an aquatic plant in the acanthus family