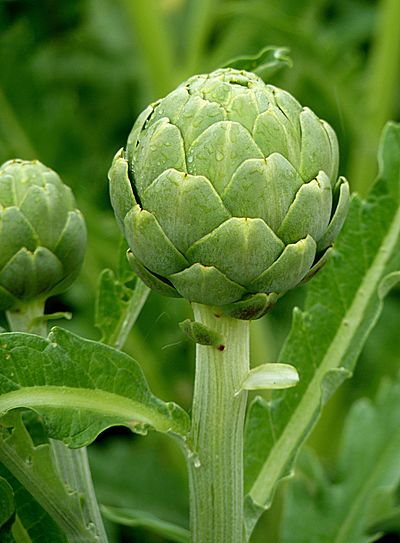 Artichoke
globe artichoke (Cynara cardunculus var. scolymus /ˈsɪnərə kɑːrˈdʌnkjʊləs ˈskɒlɪməs/), also known by the names French artichoke and green artichoke in the
Jerusalem artichoke
Wikimedia Commons has media related to Jerusalem artichoke. The Jerusalem artichoke (Helianthus tuberosus), also called sunroot, sunchoke, wild sunflower
Project ARTICHOKE
Project ARTICHOKE (also referred to as Operation ARTICHOKE) was a Central Intelligence Agency (CIA) project that researched interrogation methods. Preceded
Artichoke (disambiguation)
The globe artichoke (Cynara cardunculus var. scolymus) is a species of thistle cultivated as a food. Artichoke may also refer to: Artichoke cactus, a
Artichoke dip
Artichoke dip is a dip that uses artichoke as a primary ingredient. Some versions are served chunky, while others are puréed and have a smooth texture
Cynara
means "artichoke". Among the better known species in this genus include: Cynara cardunculus is the cardoon, artichoke thistle, or wild artichoke. The stems
Spinach dip
Spinach dips are sometimes served warm. Spinach-artichoke dip is one common variation, with artichoke hearts utilized as the other primary ingredient
Urla Artichoke Festival
Urla Artichoke Festival, is a festival held every year in April to promote the cuisine of Urla. The festival is held in Urla Cumhuriyet Square. Producers
Artichoke (band)
Artichoke is an indie pop band in Los Angeles. Formed in 1999 by Timothy Sellers, the band is best known for their concept albums. In 2005, Artichoke’s
Artichoke oil
Artichoke oil is extracted from the seeds of the Cynara cardunculus (cardoon). It is similar in composition to safflower and sunflower oil. The fatty