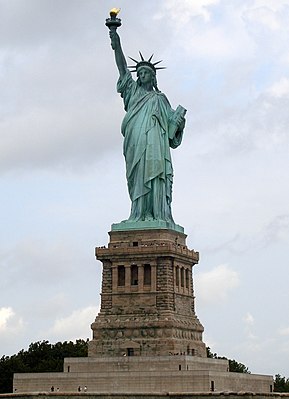 Liberty
Broadly speaking, liberty is the ability to do as one pleases, or a right or immunity enjoyed by prescription or by grant (i.e. privilege). It is a synonym
Statue of Liberty
Statue of Liberty (Liberty Enlightening the World; French: La Liberté éclairant le monde) is a colossal neoclassical sculpture on Liberty Island in New
Liberty Liberty!
Liberty Liberty! (Japanese: リバティ☆リバティ!, Hepburn: Ribatei Ribatei!) is a Japanese manga written and illustrated by Hinako Takanaga. It was first serialized
Life, Liberty and the pursuit of Happiness
"Life, Liberty and the pursuit of Happiness" is a well-known phrase in the United States Declaration of Independence. The phrase gives three examples
On Liberty
On Liberty is a philosophical essay by the English philosopher John Stuart Mill. Published in 1859, it applies Mill's ethical system of utilitarianism
Liberty University
Liberty University (LU) is a private evangelical university in Lynchburg, Virginia. Founded in 1971 by Jerry Falwell Sr. and Elmer L. Towns, Liberty is
The Liberty
The Liberty Shopping Centre is a covered shopping centre in Romford, the largest such centre in the town. It was originally built in 1968 and underwent
Liberty Media
Liberty Media Corporation (commonly referred to as Liberty Media or just Liberty) is an American mass media company controlled by chairman John C. Malone
Liberty ship
Liberty ships were a class of cargo ship built in the United States during World War II under the Emergency Shipbuilding Program. Though British in concept
Liberty Island
Liberty Island is a federally owned island in Upper New York Bay in the United States. Its most notable feature is the Statue of Liberty (Liberty Enlightening