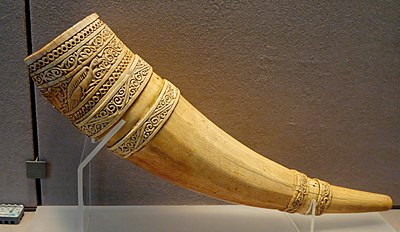 Ivory
Ivory is a hard, white material from the tusks (traditionally from elephants) and teeth of animals, that consists mainly of dentine, one of the physical
Ivory Coast
Coordinates: 8°N 5°W﻿ / ﻿8°N 5°W﻿ / 8; -5 Ivory Coast, also known as Côte d'Ivoire, officially the Republic of Côte d'Ivoire, is a country on the southern
Ivories
Ivories may refer to: Ivory carvings, objects made from ivory Piano keys, slang as keys were made from ivory until the 1950s Dice, slang as dice were made
James Ivory
James Francis Ivory (born June 7, 1928) is an American film director, producer, and screenwriter. For many years, he worked extensively with Indian-born
Ivory (color)
including the ivory gull, ivory-backed woodswallow, ivory-billed aracari, ivory-billed woodcreeper, ivory-billed woodpecker and ivory-breasted pitta
Ivory trade
The ivory trade is the commercial, often illegal trade in the ivory tusks of the hippopotamus, walrus, narwhal, mammoth, and most commonly, African and
Ivory (disambiguation)
Ivory is a substance found in the teeth and tusks of animals such as elephants. Ivory may also refer to: Ivory (wrestler) (b. 1961) George Ivory (disambiguation)
Keenen Ivory Wayans
Keenen Ivory Desuma Wayans (born June 8, 1958) is an American actor, comedian, and filmmaker. He is a member of the Wayans family of entertainers. Wayans
Merchant Ivory Productions
Merchant Ivory Productions is a film company founded in 1961 by producer Ismail Merchant (1936–2005) and director James Ivory (b. 1928). Merchant and Ivory were
Ivory-billed woodpecker
The ivory-billed woodpecker (Campephilus principalis) is a possibly extinct woodpecker that is native to the bottomland hardwood forests and temperate