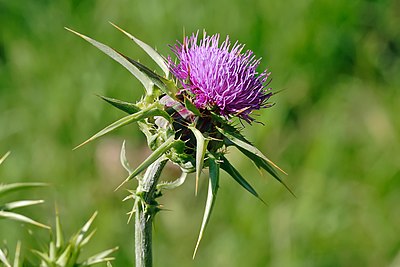 Thistle
Thistle is the common name of a group of flowering plants characterised by leaves with sharp prickles on the margins, mostly in the family Asteraceae
Silybum marianum
species of thistle. It has various common names including milk thistle, blessed milkthistle, Marian thistle, Mary thistle, Saint Mary's thistle, Mediterranean
Order of the Thistle
The Most Ancient and Most Noble Order of the Thistle is an order of chivalry associated with Scotland. The current version of the Order was founded in
Partick Thistle F.C.
Partick Thistle Football Club are a professional football club from Glasgow, Scotland. Despite their name, the club are based at Firhill Stadium in the
Thistle tube
A thistle tube is a piece of laboratory glassware consisting of a shaft of tube, with a reservoir and funnel-like section at the top. Thistle tubes are
Sow thistle
Sow thistle most often refers to yellow flowered, thistle-like plants in the genus Sonchus Sow thistle may also refer to Cicerbita, a genus of plants related
Thistle, Utah
Thistle is a ghost town in Spanish Fork Canyon in southeastern Utah County, Utah, United States. During the era of steam locomotives, the town's primary
Thistle (disambiguation)
Invercargill Thistle also known as Thistle FC Nelson Thistle Timaru Thistle Ardeer Thistle F.C. Armadale Thistle F.C. Bathgate Thistle F.C. Buckie Thistle F.C
Theophilus Thistle
thousand thistles through the thick of his thumb. Now if Theophilus Thistle, the successful thistle sifter, Thrust’s three thousand thistles through the
Russian thistle
Russian thistle is a common name that can refer to: Echinops exaltatus, also known as Russian globe thistle, is a globe thistle native to Eurasia and