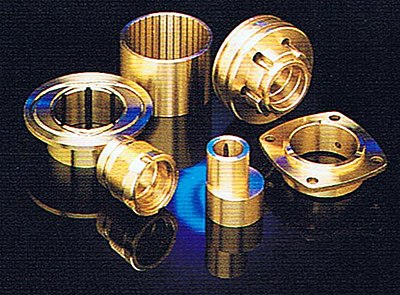 Gunmetal
for making guns, it has largely been replaced by steel for that purpose. Gunmetal, which casts and machines well and is resistant to corrosion from steam
Gunmetal (disambiguation)
Look up gunmetal in Wiktionary, the free dictionary. Gunmetal is a kind of bronze. Gunmetal, gunmetal gray or gunmetal grey may refer to: Gunmetal (color)
Gunmetal Grey
Gunmetal Grey was an American thrashcore band that was formed in 2002 as a side project of some San Francisco Bay area hardcore veterans. It was formed
Gunmetal Gray
Gunmetal Gray is the sixth novel by Mark Greaney, published on February 14, 2017 by Berkley Books. It is also the sixth book in the Gray Man series. Picking
Shades of gray
identical to old silver, first recorded as a color name in English in 1905. Gunmetal is a shade of gray that has a bluish purple tinge. It describes the color
Gunmetal (video game)
Gunmetal is a first-person shooter video game for the PC. It was developed and distributed by Mad Genius Software in 1998. The game takes place 300 years
Top Trumps
Gunmetal Holder, a metal Top Trumps case only available to club members who win the monthly prize draw. 24 Gunmetal Holder. 24 of these 24 Gunmetal Holders
Brass
the balance being zinc. Another such material is gunmetal, from the family of red brasses. Gunmetal alloys contain roughly 88% copper, 8-10% tin, and
Subaru Impreza
STi spoiler (Hatchback only), updated grill with WRX badge, and darker Gunmetal colored wheels as standard equipment. Interior changes consisted of aluminum
Shivaji
completed in possibly 2021. [needs update] In March 2022 a statue made of gunmetal was inaugurated in Pune. Based on multiple committees of historians and