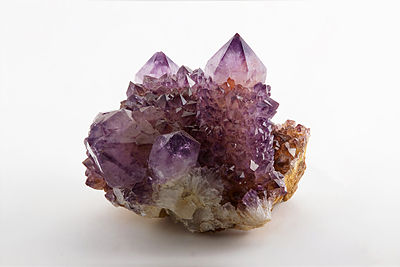 Amethyst
Look up amethyst in Wiktionary, the free dictionary. Amethyst is a violet variety of quartz. The name comes from the Koine Greek αμέθυστος amethystos
Lavender (color)
chart. The color amethyst is a moderate, transparent violet. Its name is derived from the stone amethyst, a form of quartz. Amethyst is the birthstone
Amethyst Incident
The Amethyst Incident, also known as the Yangtze Incident, was a historic event which involved the Royal Navy ships HMS Amethyst, HMS Consort, HMS London
Iggy Azalea
Amethyst Amelia Kelly (born 7 June 1990), known professionally as Iggy Azalea (/əˈzeɪliə/), is an Australian rapper. At the age of 16, Azalea moved from
Amethyst, Princess of Gemworld
Amethyst, Princess of Gemworld is a superhero published in American comic books created by DC Comics. Created by writers Dan Mishkin, Gary Cohn and artist
Ametrine
bolivianite, is a naturally occurring variety of quartz. It is a mixture of amethyst and citrine with zones of purple and yellow or orange. Almost all commercially
Amethyst (disambiguation)
Look up Amethyst or amethyst in Wiktionary, the free dictionary. Amethyst is a semi-precious form of quartz. Amethyst or Améthyste may also refer to:
Amethyst (Steven Universe)
Amethyst is a fictional character from the animated television series Steven Universe, created by Rebecca Sugar. She is voiced by Michaela Dietz. She is
Prasiolite
Prasiolite (also known as green quartz, green amethyst or vermarine) is a green variety of quartz. Since 1950, almost all natural prasiolite has come from
Quartz
jasper. Amethyst is a form of quartz that ranges from a bright vivid violet to dark or dull lavender shade. The world's largest deposits of amethysts can